The nucleus (center) of the atom contains the protons (positively charged) and the neutrons (no charge).

The outermost regions of the atom are called electron shells and contain electrons (negatively charged).

An electronic structure is the way in which electrons are arranged in an atom.

Below is a table showing the maximum number of electrons an element can have for each of its energy level shells. The information shown is for elements with atomic numbers 1 to 20:

The electronic structure of an atom can be predicted from its atomic number. For example, the atomic number of sodium is 11. Sodium atoms have 11 protons and so 11 electrons: 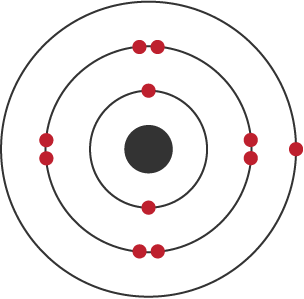 The electronic structure of sodium as a diagram

Electronic structures and the periodic table

The electronic structure of an element is linked to its position on the periodic table.

The endothermic process is a term that describes a reaction where the system absorbs the energy from its surrounding in the form of heat. A few examples of the endothermic process are photosynthesis, evaporating liquids, melting ice, dry ice, alkanes cracking, thermal decomposition, ammonium chloride in water and much more.

The exothermic reaction is the opposite of an endothermic reaction. It releases energy by light or heat to its surrounding. A few examples are neutralization, burning a substance, reactions of fuels, deposition of dry ice, respiration, solution of sulfuric acid into water and much more.

Endothermic reactions take in energy and the temperature of the surroundings decreases.

The Group 1 elements in the periodic table are known as the alkali metals. They include lithium, sodium and potassium, which all react vigorously with water to produce an alkaline solution.

The Group 1 elements are called the alkali metals. They are placed in the vertical column on the left-hand side of the periodic table. 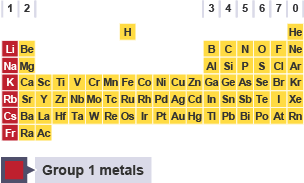 All the Group 1 elements are very reactive. They must be stored under oil to keep air and water away from them. Group 1 elements form alkaline solutions when they react with water, which is why they are called alkali metals.

The reactivity of Group 1 elements increases as you go down the group.

The Group 7 elements are called the halogens. They are placed in the vertical column, second from the right, in the periodic table. 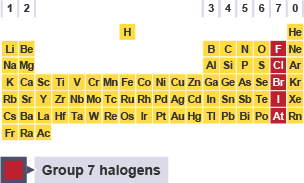 Group 8A (or VIIIA) of the periodic table are the noble gases or inert gases:  helium (He), neon (Ne), argon (Ar), krypton (Kr), xenon (Xe), and radon (Rn).  The name comes from the fact that these elements are virtually unreactive towards other elements or compounds.

Particles can only react when they collide. If you heat a substance, the particles move faster and so collide more frequently. That will speed up the rate of reaction.

If the surface area of a reactant is increased: more particles are exposed to the other reactant. there is a greater chance of particles colliding, which leads to more successful collisions per second.

A chart of the reactivity series of common metals is provided below.

When a metal reacts with oxygen, a metal oxide forms. The general equation for this reaction is:

Rust is a form of iron oxide and it forms slowly when iron is exposed to air.

When a metal is put in acid, it gets smaller and smaller as it gets used up in the chemical reaction . At the same time, bubbles of gas can be seen. The bubbles produced in the reaction are hydrogen gas. This can be proven using a burning splint because hydrogen is flammable. When the burning splint is put into the test tube containing hydrogen gas, a small explosion occurs, making a squeaky pop sound. This shows that hydrogen is present.

Magnesium is more reactive than copper. When a piece of magnesium is dipped into blue copper sulfate solution, a displacement reaction occurs.

The magnesium displaces the copper, and the products are copper and a solution of magnesium sulfate.

This is the word equation:

Reactions of Acids and Bases

When an acid and a base react, the reaction is called a neutralization reaction. That’s because the reaction produces neutral products. Water is always one product, and a salt is also produced. A salt is a neutral ionic compound.

Let’s see how a neutralization reaction produces both water and a salt, using as an example the reaction between solutions of hydrochloric acid and sodium hydroxide. The overall equation for this reaction is:

Acid reactions with carbonates and hydrogencarbonates

Acids react with metal carbonates and hydrogencarbonates in the same way. These reactions produce salt, water and carbon dioxide.

Some Important Metals and their Ores

Some important Chemical Compounds, their Chemical Formulas, and Uses